Many tankers have gotten by for years on inexpensive 4-channel radios (or expensive 4-channel radios in the case of Tamiya). And up to now, there hasn't been a great need for very much beyond that. But with the TCB the situation has changed. Not only can it read up to 16 RC channels, it actually has more than enough features and functions to utilize all of them. For those looking to upgrade their radio to a system that can take full advantage of these capabilities, we offer some suggestions below. 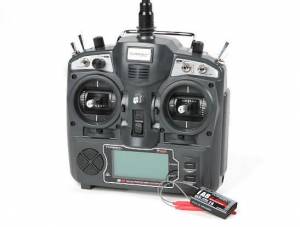 NOTE: There have been multiple versions of the 9X transmitter sold over the years under various brands and re-brands including FlySky, Turnigy, Eurgle and others. The physical transmitter is the same in all cases, the difference is with the removable radio module included.

Since late 2017 Hobby King is the only place still selling the 9X, and thankfully their present version comes with an updated AFHDS 2A module and a PPM-capable receiver (IA8). This radio is compatible with the TCB with no user modification, no firmware updates, and without having to purchase new receivers or anything else besides 8AA batteries for the transmitter, making it probably the least expensive option for an 8 channel radio. Like all 9X radios, its functionality can be significantly increased if you are willing to mod it.

For all those who purchased other versions of the 9X radio, the module included was most likely the earlier AFHDS (not 2A) protocol. We know of only a single PPM receiver compatible with that old protocol and it only supports 6 channels even though the 9X can transmit 8, and it also requires minor soldering to use, so it is not an ideal solution (you can read about that receiver here).

If you want better the 9X is still a great transmitter but you will need to do some work. The easiest change is to remove the old module and purchase a new module and receiver. The module is meant to be removable but for some ridiculous reason many 9X transmitters run the antenna wire from the stock module into the radio itself, and if so you will have to cut this wire (the stock module will then become unusable). Now replace the stock module with any JR form-factor module that supports PPM or SBus receivers and buy a suitable receiver for your new module. There are too many options to list them all here, but our recommendation: the FrSky XJT module paired with any FrSky X-Series receiver with SBus outputs (we like the X4R-SB for its small size).

Going further: In its stock form the 9X radio can only transmit 8 channels even though it has switches and knobs for over a dozen channels. If you enjoy hacking, modding and soldering you can easily turn this radio into an excellent transmitter better than products costing many times more. The list of mods that can be done to the 9X is beyond the scope of this article but a good place to start is the OpenRC Forums. Upgrading the firmware is the main mod to complete and will vastly increase the functionality and number of channels that can be transmitted. This can be done relatively easily with the help of an SmartieParts SP Basic board, or you can replace the entire 9X processor board with something more powerful like the AR9x board.

Self-centering: you will need an extra lever if you want both sticks to self-center. You can purchase one from RC Tanks Australia. Or if you don't mind the extra expense and a little bit of work, you can also upgrade both gimbals to Taranis gimbals and get self-centering on both sticks plus higher quality.

The 9X is not for everyone but has great potential for those who know what they're doing. The Turnigy 9X can be purchased from Hobby King 9X|Hobby King. 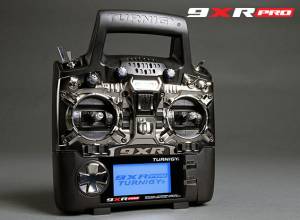 The Turnigy 9XR Pro - not to be confused with the 9X - can be thought of as a pre-modded 9X with all the work done for you. All the usual mods people do to the 9X transmitter, are already done on the 9XR Pro: backlit screen, built-in USB, an SD card slot, voice and vibration feedback, and open source software already installed. It has the same physical controls as the original 9X: three knobs, six 2-position switches, and one 3-position switch.

The 9XR Pro can't self-center both sticks without an extra self-centering lever. The easiest way to get one is buy an entire spare 9XR gimbal. This is not as bad as it sounds since Hobby King sells spare 9XR gimbals for only ~$5 US, and you will be ordering from them anyway to buy the 9XR transmitter. Another option that should work is to use the self centering lever sold by RC Tanks Australia. Although designed for the original 9X it is said to work on the 9XR equally well. However it will cost you just as much as buying an entire spare gimbal from Hobby King.

The 9XR Pro costs roughly 1/3 the price of a Taranis, but keep in mind it is sold without a battery, RF module, or receiver. By the time you add those items the price is closer to 2/3 that of the Taranis. But if you can't quite afford the Taranis this is a good alternative.

For full 16 channel capability we recommend the FrSky XJT module and any FrSky X-Series receiver with SBus. We particularly like the X4R-SB receiver for its small size. Note: although the module and receiver and even the firmware on the 9XR will be capable of transmitting 16 channels, the 9XR only has 14 physical controls!

Purchase the Turnigy 9XR Pro transmitter from Hobby King. Buy the FrSky module and receiver from any FrSky retailer. 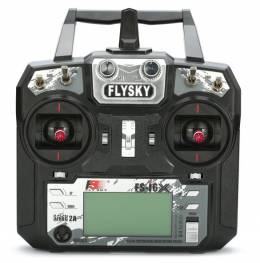 The FlySky FS-i6X is a great radio if you don't want to mess around with firmware upgrades, don't want to spend a lot of money, and can be satisfied with 10 channels. It typically comes bundled with either the FS-iA10B receiver or the X6B receiver. Both have iBus output and are therefore compatible with the TCB. The X6B receiver is a little smaller and has telemetry so is preferable. The receiver we actually like the most for its simplicity and miniature size is the FS-A8S, which you can buy separately.

Note: It is easy to confuse the FS-i6X with its earlier version, the regular FS-i6 (no “X”). Physically they are nearly identical, the only real difference is that the i6X comes with updated firmware to allow full 10 channel output, whereas the original i6 would only transmit 6 channels on the stock firmware. Although users figured out a way to upgrade the firmware on the i6, it is easier to just buy the i6X to begin with. But if you already have an i6, you can use it with the TCB so long as you get a compatible iBus receiver (again we like the FS-A8S).

Self-centering: To get self-centering on the second stick you will need to obtain an extra lever from a FlySky dealer. These can be purchased from Banggood when they are in stock.

You can purchase the FS-iA6X with X6B receiver from Banggood.

In 2017 FrSky released a less expensive alternative to the Taranis, called the Taranis Q X7. Available in black or white and costing about half the price of a Taranis X9D, it still has most of the same features of its bigger brother. The main sacrifice compared to the larger Taranis is the number of usable controls - while both radios can technically transmit 16 channels, the Q X7 only has 12 physical controls so in practice that will be the useful limit. The other drawback is that the Q X7 does not come with a battery or built-in charger. It can be powered by 6 AA or a wide variety of other kinds of batteries but regardless this involves an extra purchase. However both sticks do come self-centered from the factory which is ideal for tanks. In addition to the built-in FrSky X-series radio module it has an empty external module bay (JR form factor) if you prefer to transmit using other manufacturer's protocols.

The Q X7 does not come with a receiver unless a retailer decides to bundle it with one, we recommend the FrSky X4R-SB SBus receiver.

The best place to buy the Q X7 in the US is Aloft Hobbies, otherwise it is available internationally from various retailers such as Hobby King, Banggood, etc… 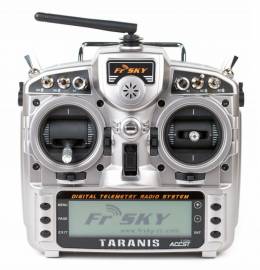 Although not the least expensive option, the Taranis X9D is a terrific value. Not only can it transmit 16 channels, it actually has enough physical controls to use all of them, including two knobs, two side “sliders”, two 2-position switches and no less than six 3-position switches! It is built out of quality components, runs open source software and its receivers are telemetry capable. Both sticks can be self-centered without the need for any aftermarket parts. In addition to the built-in FrSky X-series radio module it has an empty external module bay (JR form factor) if you prefer to transmit using other manufacturer's protocols.

Some versions include an FrSky X8R receiver, which can communicate all 16 channels to the TCB with a single cable. You can also buy the transmitter without a receiver and choose any FrSky X-series, SBus capable receiver for full 16 channel control. We particularly like the FrSky X4R-SB SBus receiver for its small size.

The best place to buy the Taranis in the US is Aloft Hobbies, otherwise it is available internationally from various retailers such as Hobby King, Banggood, etc…