Setting up your radio correctly is the most important requirement for your TCB to operate correctly. If the TCB has the wrong channel order, or doesn't know the end-points of your sticks, or the type of aux channels you have, it will not function as expected, if at all. In fact, if you experience strange behavior from the TCB, one of the first things to check is that you have correctly set up the radio.

It's a good idea to read all the information below so you get the general idea. Then check out this instructional video:

The TCB is quite literally a small but powerful computer that controls every aspect of your model. With the Radio setup features of the OP Config software, the TCB can be programmed to map virtually any channel of your radio to any function on the TCB. From starting the engine, to firing the cannon, to changing the turn mode or adjusting acceleration physics in real time, dozens of features can be applied to any position of any channel you want. For this reason it is important to note you do not need an advanced computer radio, nor do you need a radio with multiple model memories. Those are great features to have in a radio but you will not need them for the TCB. If you have two TCBs installed in two very different models, you can still use the same transmitter with the same settings to control them both, since all the unique configuration and channel mappings will be stored in the TCB itself.

What you will soon realize that you do want, however, is a radio transmitter with a lot of switches and knobs to control all the many possible advanced features of the TCB. Radio transmitters with lots of switches and knobs tend to be the same transmitters with advanced configuration options and multi-model memories. That's fine, but the point is, you do not need to do advanced programming in your transmitter or create complicated mixes to enjoy the full features of the TCB. In fact, unless you know what you are doing, we recommend you start with a clean slate as it concerns your transmitter: remove any channel mixing, set end-points to their normal range (+/- 100%), set all trims to center, set all sub-trims to zero, and clear any channel reversing.

Although you don't really need to know this, it can help make sense of some of the numbers you might see below. The position, or value, of any RC channel - for example let's say the throttle stick - is traditionally represented by a number from approximately 1000 to 2000, with 1500 being stick centered. These numbers don't have to be precise. Due to imprecise tolerances your stick-centered value may be 1497 or 1512 or some number close to 1500 but not exactly 1500. That is normal. Likewise, your stick may travel below or beyond 1000 and 2000 - maybe it will go from 950 to 2030. But those are the rough ranges that we will typically see. In the past these numbers represented the literal length in time in micro-seconds of the pulses sent by the transmitter to the receiver for each channel. With today's digital equipment that is no longer necessarily the case, but we still use the same convention that an RC channel can typically vary in value from 1000 ~ 2000. A stick on your transmitter could be set to any number in between those two extremes. On the other hand, a 2-position switch on your transmitter would only have two possible values of 1000 and 2000.

Got it? Ok, enough of the history lesson!

The TCB is compatible with several types of receivers - those that output channel data by PPM, and those that implement a digital serial protocol (presently SBus and iBus are supported). You can read more about these types of receivers on the Receiver page, but the important thing to know is that in PPM mode the TCB can only read up to a max of 8 channels, whereas SBus can carry up to 16 channels and iBus up to 14. Of course, your transmitter may not be capable of sourcing the full number of possible channels. Many receivers will probably still send data for unused channels up to the max they are capable of, but the value of those channels will never change if you can't assign them to a control on your transmitter. We will have the option of telling the TCB to ignore unused channels if that is the case.

At a bare minimum, the TCB must be able to read 4 channels mapped to the two transmitter sticks. PPM and serial receivers transmit channel information as a stream of data, one channel value after another. But depending on the manufacturer of your radio the channels may be sent in a different order, and there is no industry standard. We will need to tell the TCB which channel number belongs to which stick.

Although the TCB is flexible enough to accommodate any arrangement you may prefer, the general assumption in these guides is that you will devote one stick to tank movement - forward/reverse and left/right. The second stick is assumed to be the “turret stick” and will control the turret left/right rotation and the barrel up/down movement. Which of these sticks is the left stick and which is the right is completely up to you. When setup this way, the turret stick is also able to be used as a 9-position switch for triggering various functions (the 9 positions are the 4 corners, the 4 ends, and centered). You do not have to use the turret stick in this way, you are free to trigger functions with aux channels instead. But if you decide to setup your radio in a non-traditional manner such that the two turret functions are not assigned to the same stick, then Turret Stick Triggers will probably not work. More information about functions and triggers can be found on the Functions tab.

When you first open the OP Config program, you will see several settings on the Radio tab which you can adjust manually. However, the best way to setup your radio is to:

Now the TCB will start streaming radio data to the OP Config program. Information about each channel will suddenly appear to the right of the options, updated in real time. We will use the information on the right side of the screen to help us adjust the settings on the left side correctly. This is an example of what your screen might look like during radio streaming: 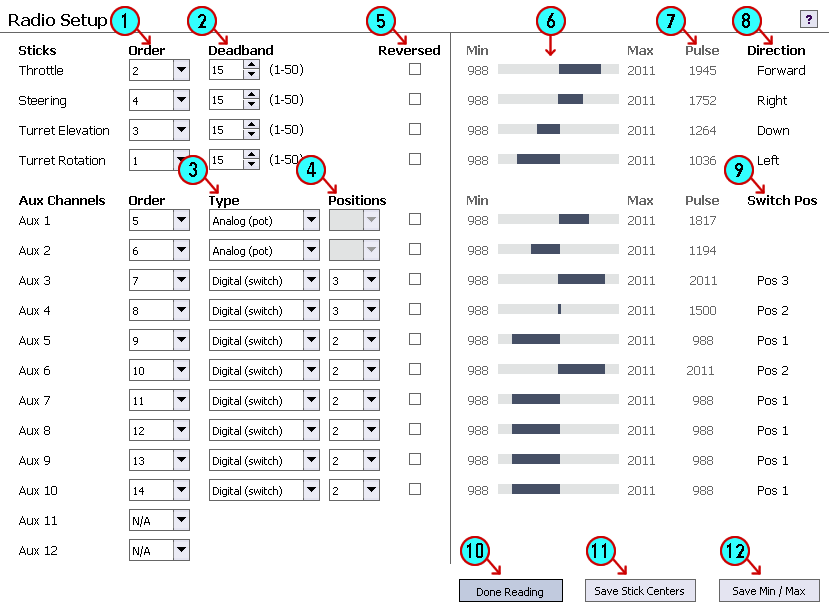 When you have assigned every channel order, type, and switch position, and you have saved the stick centers as well as each channel's min and max values, then you can stop streaming the radio (click the Done Reading button). But now these settings only reside temporarily in the OP Config program - the TCB doesn't know anything about them! Make sure you click the Write to Device button to send all the settings to the TCB. You may also want to save a settings file to your hard-drive.