This page gives you a general overview of controlling your model with the TCB. Many of the settings discussed on this page can be found on the Driving tab of OP Config, and it is worth reading that entire page for specifics. For information on connecting drive motors to the TCB, see the Motor Control page in the TCB Installation section of the wiki.

The TCB was designed with model tanks in mind, but it also works very well for halftracks, cars, or even other types of models such as ships and robotic projects. On the Motors tab of OP Config you can select the vehicle type, and there are three options:

If using the TCB in an RC boat with dual drive motors, the Halftrack vehicle type will work well. It will allow you to control a rudder servo but also to use differential thrust on the two propulsion motors. Otherwise you can use the Car vehicle type. The TCB can even control more complex model ships such as those with bow thrusters using the RC Passthrough Functions or possibly with the manual Onboard Motor Control functions (assuming you don't exceed maximum current draw).

Of course if you use the TCB with a model ship, you still have access to all the cannon and IR features, making this perfect for military boats and water-based IR battles! The TCB allows you any control scheme you want, even unusual ones. Want to control the tank's forward speed with a slider on the side of your transmitter? Ok, you can. But the basic assumption is that you will use one of the sticks on your transmitter to handle movement and steering. We will call this the “drive stick.” The drive stick can be the left or right stick of your transmitter depending on your preference.

When using a drive stick the controls are fairly intuitive as shown in the graphic. There is one thing to know - the TCB allows you to set a Change Direction Delay which prevents the model from changing direction from forward to reverse (or vice versa) without first coming to a stop, returning the stick to center, and letting the delay expire. The delay can be set very small, even a fraction of a second - or it can be disabled completely. This delay can help save your gearbox and drivetrain from wear and tear, but if you don't know it exists you might think something is wrong with your transmitter. See the Driving tab in OP Config to adjust this setting.

Turning doesn't require any special explanation, but Turn Modes do. Presently the TCB supports three turning modes for tanks. You set the active turn mode on the Driving tab in OP Config, or you can change it on the fly by assigning a trigger to the necessary turn mode Functions.

If you are operating a halftrack you will obviously have front wheel steering. But you also have the option of applying some of the turn command to the rear treads as well and you can vary the level of this effect. If enabled, the turn applied to the halftrack treads will also be subject to whatever turn mode you selected. See the Driving tab of OP Config for these settings.

Neutral turns (turning in place) are accomplished by leaving throttle at zero, and moving only the steering left or right. This is different from many other manufacturers such as Tamiya.

Note that you can disable neutral turns completely if you so choose, or restrict the max speed of a neutral turn to prevent unrealistic Heng-Long style “super spins.” See the Driving tab in OP Config for these settings.

Inertia is a force that operates against an object trying to accelerate. In real life a tank that weighs many tons can not accelerate immediately from a stop to full speed, but a lightweight plastic model that is vastly overpowered can.

Momentum is the tendency of an object in motion to stay in motion. Momentum is what causes heavy vehicles to coast to a stop. But a small model tank will stop instantly if you let off the throttle.

The TCB allows you to apply acceleration and deceleration constraints, to set their level individually, and even to adjust the intensity of the effect - or turn the effect on or off - from your transmitter. For an in-depth discussion of these effects see the documentation on the Driving tab in OP Config.

Developers: in addition to linear constraints, we have the ability to create more complex sets of rules that vary acceleration and deceleration based on various instantaneous factors. A collection of these rules is called a Preset. An example of a simple preset, and a discussion of the mechanism by which these constraints operate in code can be found in the OP_Driver C++ class. Placeholders for three presets are already created and can be selected in OP Config for testing.

At high deceleration constraint levels the model can take a long time to “coast” to a stop. In these cases you may wish to “brake” the model to slow it down faster. To do so, simply hold the drive stick in the direction opposite of travel. For example, if you are moving forward and want to brake, hold the stick below center in the reverse direction. The amount of brake applied will be proportional to the distance you move the stick beyond center in the opposite direction: if you just barely hold the stick in the opposite direction, a small amount of brake will be applied, and as you move the stick farther more and more brake will be applied.

If you move the stick all the way to the extreme in the opposite direction, your tank will always come to an immediate stop. Think of this as the emergency brake. Use it if you are about to collide with an obstacle. The effect won't look realistic but you can save your model from damage.

Of course the TCB has provisions for brake and running lights which you can adjust in several ways. See the Lights & I/O tab of OP Config for more on these settings.

Note: If you set the Change Direction Delay to 0, and if acceleration and deceleration constraints are disabled (all settings on the Driving tab of OP Config), then braking no longer occurs. Instead stick movements in the opposite direction of travel will result in the model changing direction instantaneously. This gives you control similar to what you may be used to with a stock Heng Long.

When the acceleration constraint is set to a high level it can make driving more smooth, but it can also make starting from a stop feel sluggish and you may have to use a lot of stick movement to initially overcome the resistance of the drivetrain. For this reason the TCB has a “nudge” feature that lets you specify a short length of time and a throttle setting. Whenever you start moving from a complete stop, the throttle setting will be applied for the short length of time you specified, over-riding any acceleration constraint. This has the effect of “nudging” or pushing the model forward briefly. The length of time for this effect can be very small, even a fraction of a second. When the effect is over, your acceleration constraint will take effect and future acceleration will be subject to that constraint until the next time you come to a complete stop.

By adjusting the acceleration constraint and the parameters of the nudge effect, you can obtain very precise, smooth and realistic control over your model even at very low speeds. To adjust the nudge settings, see the Driving tab in OP Config.

Like most other RC tank control boards, the TCB allows you to start and stop the “engine.” On the TCB this is accomplished by assigning any trigger to one of the Engine functions (on, off, or toggle). You can also choose to start the engine from the drive stick itself if you don't want to use a trigger. And you have the option of letting the engine turn off automatically if you have been sitting at idle after some length of time. See the Driving tab in OP Config for these settings.

Unlike most other tank control boards, the TCB also allows you to control the “transmission.” The transmission automatically engages a short time after you start the engine (the delay is to allow the engine startup sound to complete), so you don't have to think about the transmission if you don't want. But if you do want, you can assign a trigger to one of the Transmission functions and engage/disengage it at will. While disengaged the engine sound continues to play, as does the smoker. By moving the throttle stick you can “rev” the engine, which will increase the smoker speed and increase the speed of your engine sound - but the tank will remain stationary. Also while disengaged, you will notice the smoker idles at a slightly faster speed than it does when the transmission is engaged, just as the engine would in real life. You can adjust the smoker idle speed on the Motors tab of OP Config.

If you disengage the transmission while the model is moving, it will coast to a stop subject to your deceleration constraint. While coasting you may still steer and use the brake if you need to stop quickly.

Onboard Red & Green LEDs for Troubleshooting 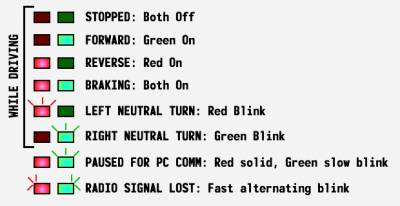 You can use the onboard Red and Green LEDs to verify that your board is responding properly to your radio. While driving, the Green LED indicates forward movement, the Red reverse movement, and both on at once indicate braking. The LEDs are off when stopped. When performing neutral turns, the Green LED blinks during turns to the right and the Red LED blinks during neutral turns to the left (if neutral turns are enabled). When not driving, a solid Red LED indicates the TCB is not in normal operation mode: either because it is still booting up, or because the user has entered a Special Menu, or because it is paused in order to communicate with a PC. In Special Menus the Red LED will remain solid and the Green LED may blink to indicate certain information or steps. When communicating with the PC, the Red LED will remain solid and the Green LED will blink slowly.