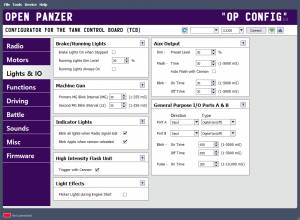 The TCB has multiple outputs intended for use with LEDs and a few other general purpose ports:

AUX: Aux Output, can be used for lights but also relays and even low current motors. This port has special settings not available to the other light ports.

The AUX and light outputs use a JST-PH connector. This is a common connector used in RC cars for LEDs. Note that none of these ports have inline resistors built in, so if you intend to drive LEDs you will need to incorporate current-limiting resistors in your wiring. Plug-and-play inline-resistor adapters may also be available. See the Lights page for more information about the hardware.

The General Purpose I/O ports are logic-level which means that, unlike the AUX and light outputs, they can not provide very much current at all - about 20mA max. Do not try to drive an LED directly from these ports! See the I/O Ports page for more information on hardware limitations.

It is important to understand that the brake and running lights are the same light. When the brake light is on, the lamp will be at 100% brightness. When the “running” light is on, the lamp will be at some dim level that you determine. You can eliminate the running-light effect by setting the dim level to 0 or simply don't assign a trigger to turn it on. The brakes on the other hand do not need a trigger to operate - they will always come on automatically whenever the vehicle is braking.

Brake Lights On when Stopped

When brake lights are not active, you can choose to turn on or off “running” lights, which are simply the brake lights set to a lower brightness level as specified here. Running lights do not turn on automatically, you need to assign a trigger (such as a switch on your transmitter) to one of the Running Lights functions. Unless you check the next setting - then you don't need a trigger:

If you check this option, the running lights will always be on. In other words, the brake lights will always be on at the dim level specified until braking actually occurs, at which point they will be set to full brightness until braking action stops, and then they will return to the dim level. Use this option if you want running lights but don't want to assign a trigger to them.

Note: the TCB may not be able to detect a loss of signal in all cases. If your receiver is set to continue transmitting data even when the signal is lost (“failsafe receiver”), then the TCB will have no way of knowing the radio is off. For that reason, it is actually better if you can disable any failsafe on your receiver.

If checked the LEDs in the IR Appple will blink briefly after the cannon reload time has expired, this can be useful in IR battle to let you know the instant when you are able to fire once more. The cannon reload time is dependent on your selected weight class, discussed on the Battle tab.

If checked, the High-Intensity Flash output (FLASH on the TCB) will automatically be triggered when the Cannon Fire function is called. If unchecked, you can still trigger the flash unit by itself by using the High Intensity Flash function. 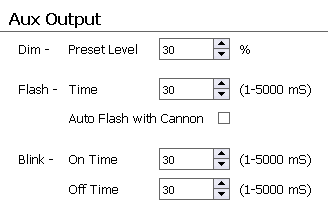 The Aux Output uses the same JST-PH connector as the other light ports, and it can be used to drive an LED the same as the others, just assign a trigger to turn it on or off. However this port also has several other options not available to any other port. The port can be dimmed to a preset level, or you can even assign a variable (analog) trigger to adjust the dim level on the fly. The Aux output can also be triggered to Flash (blink once) or Blink continuously until turned off.

The Aux Output port is also unique in that it is protected with a “flyback” diode. This makes it suitable for turning on/off an inductive load such as a 5 relay. It can even be used to drive a low-current motor.

Note: just because the settings below are filled in, doesn't mean the Aux Output will actually do anything. To make it come on to a preset Dim level, or Flash, or Blink, you must assign triggers to those functions on the Functions tab.

For more information on the hardware limitations of this port, see the Aux Output page.

For a complete list of all functions related to the Aux Output, see the Functions and Triggers page.

The Aux Output has a function called Aux Output - Preset Dim Level. If you trigger this function it is basically the same thing as turning the output On, except it will turn on to the preset dim level you specify here instead of to 100%.

If this box is checked, the Aux Output will automatically be flashed (output brought high) whenever the cannon is fired, no function trigger needs to be created. If your muzzle flash is a simple LED, connect it to the Aux Output and check this option. But if you are using a Taigen High Intensity Flash unit, connect it to the dedicated Flash port on the TCB instead, in which case this Aux output can be used for other purposes.

Blink - On and Off Time

General Purpose Input/Output Ports A & B 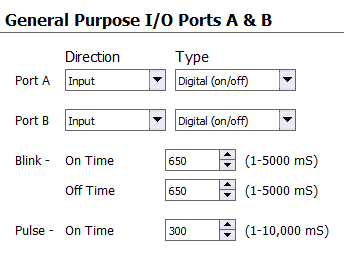 The A & B ports are general purpose, logic-level ports that can set to input or output depending on your needs.

Note: if you don't intend to use ports A & B, leave them as inputs (digital or analog doesn't matter). As inputs there will be less chance of an accidental short causing damage to the onboard processor.

Using the I/O as Inputs

If you set Port A or B to input they will show up in the Trigger Source list and you can use them to trigger any function.

Digital Input: If you want the input to be on/off, set the input type to “Digital (on/off)” and wire a switch such that the signal pin is connected to ground when the switch is in the on position, and disconnected when in the off position. You can now use this digital input to switch or toggle any digital function in the Function List. For example, you could use this as a physical switch on your model to turn on or off the engine if you didn't want to control that from your transmitter.

Analog Input: If you want the input to be variable, set the input type to “Analog (variable)” and attach a potentiometer of 1k - 10k resistance to the port such that the signal pin is connected to the center tap of the potentiometer, and the two ends of the potentiometer are connected to +5v and Ground. Now you can use this analog input to adjust any analog function in the Function List. For example, you could install a potentiometer on your model to adjust the acceleration or deceleration constraint level, or both (you can assign more than one function to a single trigger).

Using the I/O as Outputs

You can then assign a trigger to these functions and in so doing control the output of these ports. The first three functions are self-explanatory, the fourth function, “Pulse,” will briefly set the output pin to the state opposite its default. For example, if you had set Port A to Output with Default High, the pin will be kept high (+5 volts) normally and the Pulse command would cause it to briefly be held Low (to Ground). This feature can be used to emulate a button press to some external device.

The fifth function will cause the output to blink and blinking will continue until you call the “Turn On” or “Turn Off” function. The blink rate can be set by using the “Blink - On Time” and “Off Time” values (the blink rate is shared by both outputs).

What you do with these outputs is up to you, but remember these are logic-level outputs! That means they can not source enough current to actually power something, not even most LEDs! Instead consider the outputs like signals, and the signals can tell some other more powerful circuit to do something, or they could be used as direct inputs into another microcontroller (such as another Arduino). (If you know what you are doing, and you are certain your LEDs do not draw more than 20mA, you can connect them directly to the port).

If you want to use these outputs to turn on a lamp, or a relay, or some other object that draws more than 20mA of current, you will need to use a driver circuit. You can find a schematic for a MOSFET driver adapter on the I/O Ports page. Alternatively you may want to use the Aux Output (see above) which is capable of driving a load directly.