On this page we offer a basic description of IR battling, what it is, and how it works. For specific details on physically connecting an IR receiver and transmitter to your TCB see the Infra-Red installation page. And to change protocols or adjust any of the other battle settings, see the Battle tab of the OP Config desktop program.

What is IR Battling? 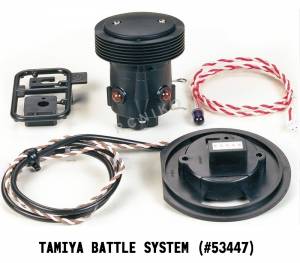 IR battle is when model tanks use infra-red beams (just like those from your TV remote) to “shoot” each other. Each tank must have an infra-red transmitter, which is just a special LED designed to emit light in the infra-red range. And each tank must also have an infra-red receiver so it can detect incoming “hits.” For some reason people will often call the IR receiver the “apple” although it doesn't really look like one.

Several companies make IR receivers and transmitters but the industry standard is the Tamiya Battle System (#53447). It's not especially cheap but you can buy it for a lot less if you search on eBay or buy one through the AAF Tank Museum shop. The set comes with a Tamiya “apple” (Tamiya calls it the GFS for “gun fire simulator); a base that you install in the turret of your model that allows you to easily plug in or remove the apple, and an infra-red LED transmitter.

When an IR beam is transmitted from one tank to the other, it is not simply a beam of infra-red light that turns on. In fact it is a signal of very rapid and brief pulses that make up a specific code, or protocol. Unfortunately there is no actual industry standard for these codes, although Tamiya comes the closest to a standard since it has been around the longest. But even if the Tamiya cannon fire code is the most commonly used, in recent years other manufacturers have started to introduce codes for machine gun fire and even codes that will “repair” a tank rather than “damage” it. Among these there are certainly no standards.

The TCB is compatible with virtually every major protocol on the market today. Settings on the Battle tab of OP Config will let you select which IR protocol you want to use for cannon fire, machine gun fire, and repair. Any protocol you select will be both the protocol you fire, and the protocol you accept hits from. Although you can only fire a single protocol at a time, the TCB does allow you to accept incoming hits from an optional second cannon protocol in addition to the one you are set to fire. Hits received from non-selected protocols will be ignored. 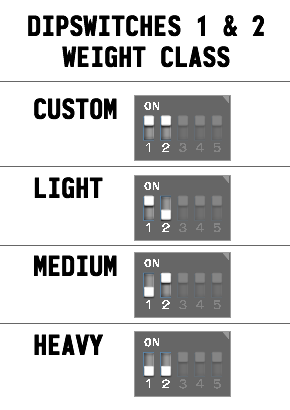 Tamiya originated the concept of weight classes for their model tanks, and they provide three options: light, medium and heavy. The TCB keeps the same three weight classes but adds a fourth class called Custom, which you can adjust however you want. The actual weight class can be changed at any time in the field by the position of dipswitches 1 and 2 on the TCB (see here for more info).

Each weight class defines three values related to IR battle: the amount of time it takes for the tank to reload its cannon (firing rate), the number of cannon hits the tank can receive before being destroyed, and how long of an invulnerability time the tank is given after being destroyed. The first two are self-explanatory, but the invulnerability time needs some explaining. When a tank receives enough hits and is considered “destroyed,” it becomes immobilized for 15 seconds while lights in the apple blink. After the 15 second period is over, the tank “re-spawns” (to borrow a computer gaming term), or in other words, comes back to life with 100% health. As soon as the model returns to life the invulnerability timer begins for whatever length of time is specified by the model's weight class. During the invulnerability time the tank is invincible and will ignore all hits. The idea is to give a re-spawned model time to move away from its prior location and make it difficult for the opposing team to position themselves around the destroyed tank in an effort to kill it again the instant it comes back to life.

No matter how many times your tank is “destroyed” it will always return to life. But depending on club rules where you battle, you may be required to drive off the field after re-spawning a certain number of times.

In general, “Heavy” tanks will have longer cannon reload times (slower firing rate), but require more hits before being destroyed, and have a shorter invulnerability time after coming back to life. Conversely, a “Light” tank will be able to fire faster but will be destroyed with fewer hits, while having a longer invulnerability time.

When your model receives an IR signal from another tank for a recognized protocol, your tank will be “hit.” If you are using the Tamiya receiver apple or some other brand that has built-in notification lights, the apple will glow and flash to indicate a hit, and if you have a sound unit attached your explosion sound will play.

Hits also inflict “damage” on your model. The Tamiya specification defines damage as a percentage reduction in your model's speed. The first hit will typically reduce max speed to 50%. With enough additional hits speed will drop to 25%, and eventually when the vehicle is destroyed all movement will cease for 15 seconds until the model comes back to life as described above.

The TCB is actually capable of more nuanced damage or even random and unpredictable damage, though this feature is still in development. You can select which “Damage Definition” you want to use on the Battle tab of OP Config. The Tamiya Spec will follow Tamiya's formula for gradually reducing speed, the Experimental definition will allow developers to create different damage effects. However most clubs will probably want you to use the Tamiya specification in order to be compatible with other Tamiya models.

Of course, the Tamiya specification was developed for cannon fire only and it knows nothing about taking damage from machine gun hits. If you have machine gun IR enabled on your model, each machine gun hit will count as some percent of damage (depending on the maximum number of machine gun hits you have specified for your model), and the same Tamiya speed reduction rules will be applied to these hits. Of course for complete compatibility with Tamiya you can just disable the machine gun IR functionality completely.

There are three different IR codes you can send (if you have enabled them) - the cannon fire code, the machine gun code, and the repair code.

To fire the cannon or repair protocol you must trigger the Cannon Fire function (read Functions and Triggers for more information). At that point the TCB will check the status of the Fight/Repair switch. If it is in the Fight position, the selected Cannon IR Protocol will be sent out the IR transmitter LED, or of it is in the Repair position the selected Repair Protocol will be transmitted instead.

To “repair” another tank, select a repair protocol on the Battle tab of OP Config, set the Fight/Repair switch to Repair, and trigger the Cannon Fire function. The repair signal will be sent with much less power than a cannon fire signal, which means you need to get your tank very close to the tank you are going to repair otherwise it will not receive your signal.

As soon as you fire the repair protocol, your model will be immobilized for 15 seconds while the repair operation is underway. Note this will happen whether the tank you are trying to repair receives your signal or not, so make sure you really are close to your intended target so as not to waste the shot! Of course during the repair operation you will be especially vulnerable to enemy fire since you will be unable to move.

During the repair operation the lights on your apple (if your apple has them) will blink in a repeating pattern from slow to fast.

When the 15 seconds is up the repair is over, and you will once again be able to drive your model.

Being Repaired by Other Tanks

If your tank has taken damage from enemy fire, you are eligible to be repaired. The tank repairing you must have its Fight/Repair switch set to the Repair position and you both must be configured to use the same Repair Protocol. The repair signal is sent at reduced power so be sure you maneuver your tank very close to the repair tank or else you might not receive the signal.

As soon as you first receive the repair signal your tank will become immobilized for 15 seconds (meaning, you can not move). You will also be unable to fire your cannon. During this time the lights on your apple (if your apple has them) will blink in a repeating pattern from slow to fast. You are still vulnerable to enemy fire! If you are hit while being repaired, the operation will be cancelled, you will not receive any health improvement, and you will still take whatever damage the enemy fire inflicts. But you will no longer be immobilized and you will instantly be able to move (unless the hit destroys you).

If the repair operation completes successfully then your tank will have the health equivalent of one cannon hit restored. You can be repaired as many times as you like until you are restored to 100% health.

If you receive a repair signal and you are already at 100% health, your model will simply ignore the signal.

A Note About IR and Slipring Turrets

Some tanks, notably Taigen brand, use an electrical slipring to pass signals to the turret but still allow the turret 360* rotation without tangling wires. Unfortunately, these sliprings are electrically noisy and if you run the IR reception wires through them, your tank will almost certainly confuse this noise for false hits. If you run the IR transmission wires through the slipring you may find that your hits are not transmitted correctly. In short, if you wish to use IR functionality in your model then you should not use sliprings.

If you are using a Tamiya apple then display LEDs are built in, but other brands may omit them. If you do have display LEDs the TCB will use them to signal various things to the user, as shown in the video below.