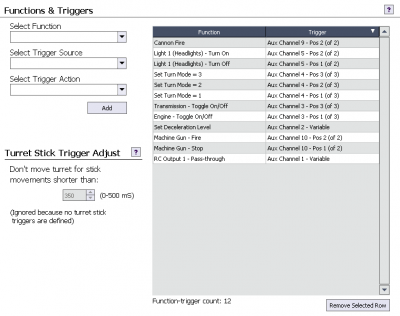 The ability to link Functions and Triggers is a key feature of the TCB that sets it apart from any other product on the market today, and gives it so much power and flexibility. “Functions” and “Triggers” may sound complicated if you haven't heard about them before, but don't worry, the concept is very simple. This picture shows some functions and triggers linked together on the Functions tab of OP Config.

Triggers cause a function to be executed. Triggers are how you make things happen. Triggers can be any Aux channel on your transmitter. The Turret Stick is another trigger with 9 positions (the four corners, the four ends, and centered). If one of the I/O ports has been set to “Input” it too will show up as a trigger. Other triggers are actually events rather than inputs.

There are two basic types of triggers which we call “Analog” and “Digital.” These names are not used in a strict technical sense but rather to represent the basic difference between the two types. A simple way to understand the difference is that a digital trigger is like the on/off switch on your stereo, and an analog trigger is like the volume control. Digital triggers have a finite number of positions, but the number of positions can be more than just on and off. Digital triggers can be switches on your transmitter that might have 2, 3 or more positions. The Turret Stick as already mentioned is considered a digital trigger with 9 positions. On the other hand, Analog triggers are variable inputs. The best example is a knob, dial, or lever on your transmitter. You can also set one of the A or B I/O ports to analog input and attach a potentiometer to create another analog trigger.

Note: Because most triggers actually come from your transmitter, it is very important that you run through Radio Setup before you start creating links between functions and triggers. It is especially important that you have correctly defined the types of all your aux channels - are they digital? Analog? Are the switches 2 position or 3 position? All the information you provide on the Radio tab of OP Config will be used to populate the Trigger List. If the Radio information is wrong, you may find that your functions don't work as expected, or at all.