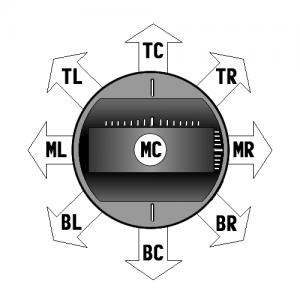 The turret stick is whichever stick on your transmitter you have assigned the turret rotation/barrel elevation movements. This can be the right or left stick depending on your preference. Note it is also possible that you have not assigned these two movements to a single stick - in that case, even though the turret stick trigger will still be available, it simply won't work.

By using the turret stick as a source of triggers, you can actually perform quite a few actions even if you only have a 4 channel transmitter (meaning, no channels other than the two sticks). Of course, using switches and knobs typically works better if you have them.

The turret stick has 9 positions that can be used as a trigger source - the four corners, the four ends, and stick centered.

Aux channels can be classified as analog or digital. An example of an analog Aux channel would be a knob or lever on your transmitter. An example of a digital Aux channel would be a switch. The TCB can recognize switches with up to 9 positions. Note: if you intend to map your aux channel to an RC Passthrough function, you should set it to analog even if the physical control is actually a switch. But if you intend to map a switch to a discrete function (for example, to turn the engine on and off), then set it as digital.

For the Aux channels to work correctly you must first run through Radio Setup in OP Config. This is where you specify how many Aux channels you have and what type each one is.


General Purpose Inputs A & B

The TCB has two general purpose I/O ports named A & B. They can be set to input or output on the Lights & IO tab of OP Config. Only if they are set to input will they then appear as triggers.

Much like Aux channels, inputs A & B can be set to either digital (on/off) or analog. You can then attach a switch or a potentiometer to the input as described on the I/O Ports hardware page.

Obviously, unlike the Turret Stick or the Aux channels on your transmitter, these triggers can't be controlled remotely from your radio. But it can still be useful to have a switch or knob physically located on your model to trigger some function on the TCB. You could use a switch to turn on/off the engine for example, or use a potentiometer to adjust the deceleration constraint.

Two triggers are available that will occur when the vehicle speed increases above or falls below a user-defined percentage: Vehicle Speed Increases Above and Vehicle Speed Decreases Below. When you select one of these triggers you must then also specify the actual level from the subsequent drop-down list. These triggers may be useful to play or enable certain sound effects at certain speeds, or to modify driving characteristics (for example automatically adjust the turn mode at different speeds).

Example: you assign a function to Vehicle Speed Increases Above 40%. Whenever the vehicle speed transitions from 40 to 41%, the function will be called.

Example: you assign a function to Vehicle Speed Decreases Below 1%. Whenever the vehicle comes to a stop, the function will be called.

Three more variable triggers exist that can be assigned to any analog function: Throttle Command, Engine Speed, and Vehicle Speed. Throttle command mimics the movement of your throttle stick when the engine is on. Engine speed is similar to throttle command but will be adjusted slightly not to increase or decrease too abruptly, similar to a real engine. Vehicle speed will of course reflect the actual movement of the vehicle, which itself is contingent on acceleration and deceleration constraints, etc… Throttle command and engine speed are active whenever the engine is on, vehicle speed will be active when the transmission is engaged. Note that for all three, “idle” or vehicle stopped equals an output of zero. What you choose to assign these triggers to is up to you, but there are probably not many practical use cases.

In addition to the throttle command trigger mentioned above (available only when the engine is running), the steering channel, turret rotation channel, and barrel elevation channel can also be used as variable triggers to be assigned to any analog functions (available full time). You do not need to assign these to any functions in order to achieve the standard functionality (steering, rotation and elevation). They are provided only for advanced applications where we may want to re-map or copy these inputs to alternative outputs.

Unlike most triggers that represent inputs into the system, ad-hoc triggers represent events that occur within the system, to which we may want to assign other events.