The Radio Setup routine is where we teach the OSL each channel's min, max and center points. It should be performed with any new model after you have trimmed the car. Assuming you don't change the trim/subtrim on your radio it only needs to be done once per model. You can upload new light settings to your controller as many times as you want and your radio settings will remain unchanged.

You can run through the radio setup mode with or without a computer connection. If you do it without the Red and Green onboard LEDs will indicate to you what the various steps are (described below). However, you can also perform the radio setup while connected to your computer and this may be easier since you can follow the on-screen prompts. To perform Radio Setup with the help of your computer, first connect to the OSL with your FTDI adapter, then in the Arduino IDE select the COM port assigned to your device, and finally open the Serial Monitor. The example below shows COM3 but your port number may be different. Once open, make sure the baud rate in Serial Monitor is set to 38400 (see image later on this page).

Opening the Serial Monitor in the Arduino IDE

NOTE: If you decide to do your radio programming with the OSL connected to your computer, please remember to unplug the battery from your model first! If you have problems with the OSL or the receiver “browning out” during radio setup, you can also unplug your steering servo (but leave the steering channel connected to the OSL board).

NOTE: If you decide to do your radio programming without a connection to the computer, then you do need to keep your model battery plugged in, otherwise you will have no power to the OSL through your receiver. But in this case you will want to disconnect your motor from the ESC! The radio setup requires you to move the throttle back and forth, so you don't want your car running off the bench. 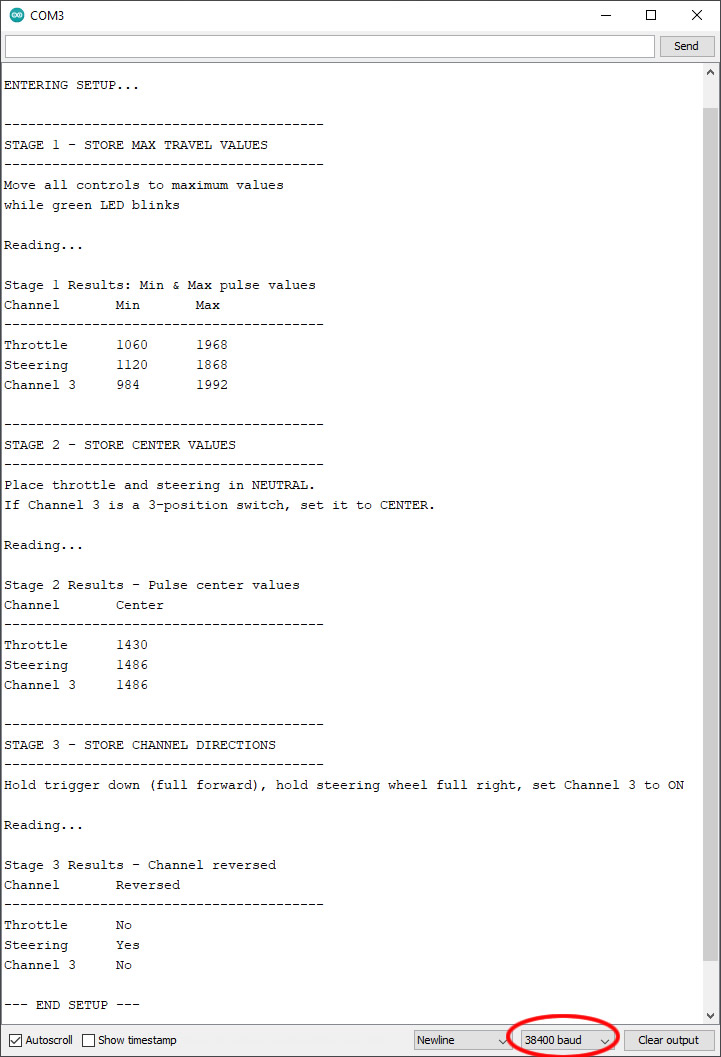 To enter Radio Setup, press and hold the button the OSL board for 2 seconds.

Once Radio Setup begins you will see the Red LED on the board light solid. The Red LED will remain solid for the duration of setup mode, and the Green LED will blink to indicate which stage you are in. There are three stages to Radio setup. At the beginning of each stage the Green LED will blink slowly once, twice or three times (depending on if you are on the first, second or third stage). This means get ready for the upcoming stage. Each stage lasts about ten or fifteen seconds. While it is in the given stage, the Green LED will continue to blink quickly once, twice or three times, again depending on the stage. This is the sequence, and what you need to do:

The Green LED blinks slowly once as an indicator to get ready, and then throughout the remainder of Stage 1 it blinks quickly 1 time. During Stage 1 move your throttle trigger, steering wheel, and channel 3 switch (if used) back and forth to their limits. The controller will save the end points values. If connected to a computer, you will want to see the Stage 1 results reflect channel end points somewhere in the general range of 1000 to 2000.

The Green LED blinks slowly twice as an indicator to get ready, and then through the remainder of Stage 2 it blinks quickly 2 times. For Stage 2 release your throttle trigger and steering wheel, and if you are using a 3- or 5-position switch on Channel 3, set it to the middle position. If you have a 2 position switch on Channel 3, set it to ON. Leave the controls untouched during this phase and the controller will memorize the center values are. Generally center points should have values close to 1500.

The Green LED blinks slowly three times as an indicator to get ready, and then through the remainder of Stage 3 it blinks quickly 3 times. During this stage hold your throttle trigger to full forward, hold your steering wheel to full right, and if you are using Channel 3 set the switch to the full on position (this will end up being Pos 2, 3 or 5 depending on whether your channel is a 2 position, 3 position, or 5 position switch).

After the three stages are complete the Green LED will turn on and stay lit for 3 seconds, and then both the Green and Red LEDs will finally turn off. Radio setup is now complete.