The TCB is compatible with several types of hobby receivers - those that can output PPM (sometimes called CPPM or PPM-sum) and those that can output digital serial data. Of the latter type SBus and iBus are presently supported. You can find a PPM or serial receiver for literally every brand of radio available today, see our Receiver Selection Guide for recommendations. If you don't yet have a transmitter, we also have several Radio Recommendations, or if you already have a module-capable radio read our Module Guide.

PPM receivers are available for virtually every major brand of RC radio on the market today. The PPM protocol allows up to 8 channels of data on a single data line. Some PPM receivers may actually be called something like a “4 channel receiver” but what this means is that the receiver can only drive 4 servos directly, however all 8 channels should still be present on the PPM port, assuming the transmitter also has 8 channels.

SBus is a serial protocol used by several manufacturers such as Futaba, FrSky, and RadioLink among others. It allows up to 16 channels on a single data line.

iBus is a serial protocol used by several FlySky and Turnigy radio systems. The protocol itself is designed to carry 14 channels, but most FlySky nor Turnigy transmitter are only capable of sending 10 channels or less.

The RADIO port on the TCB has two positions - one on the top of the board, and one on the bottom. If your receiver is PPM or iBus, plug it into the top slot. If SBus, use the bottom slot. In addition to the data pin, the RADIO port also provides +5v and Ground to power your receiver. A short male-to-male servo cable works well for the connection. The TCB will auto-detect the correct protocol on startup. 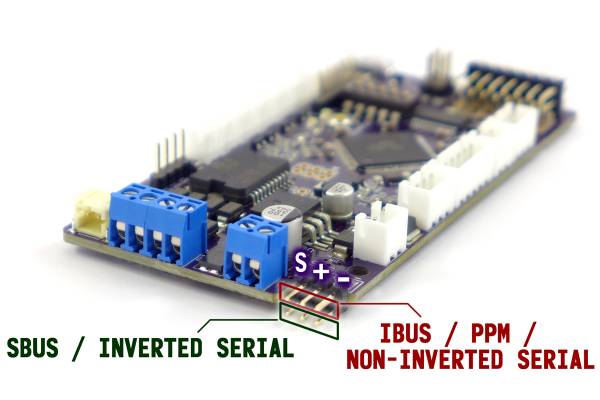 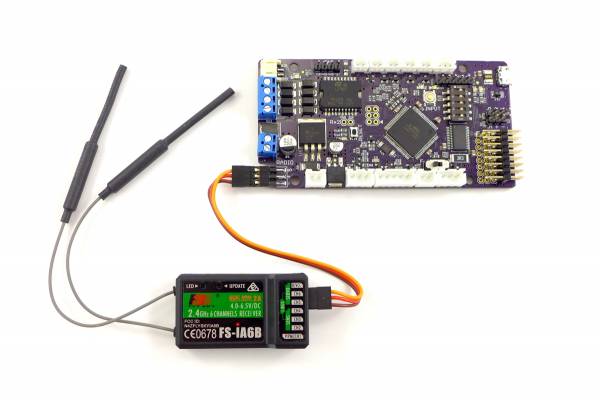 iBus (and PPM) receivers plug into the top of the board 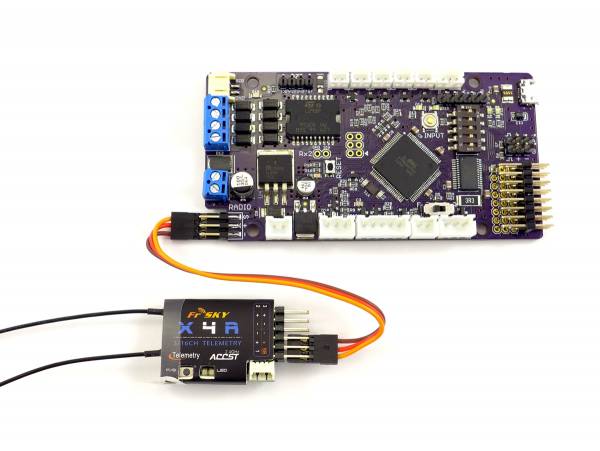 SBus receivers plug into the bottom of the board

Why Not Accept Standard Receivers?

Most aftermarket tank controllers require you to plug a separate cable from the receiver to the controller for every channel you use. Boards like the Tamiya MFU and the Clark TK-22 require 4 cables from the control board to your hobby receiver. That's a lot of wiring and you still only get to use 4 channels. The TCB on the other hand can read up to 16 channels, which would require a ridiculous number of cables. Not only would the wiring be a rat's nest, the TCB would have to be much larger to accommodate 16 inputs - not to mention the size of the receiver.

This same issue plagued the popular multirotor and “drone” segment of the RC hobby. Like model tanks, multirotors require a special “control” board to keep the aircraft level and provide other advanced functions, very much the same way that tank controllers provide features such as IR battle capabilities. But as more and more features were added to these “drones” the number of cables from the receiver to the flight controllers became a nuisance and alternatives such as PPM receivers became increasingly popular. In time even the 8 channel limitation of PPM seemed restrictive so new serial protocols such as SBus were developed.

The TCB isn't trying to compete with entry level tank controllers of which there are already plenty on the market. It aims to offer the most advanced features available today, and individual connections for individual channels would simply prevent the TCB from reaching its full potential. Thankfully because of the popularity of quads, multirotors and “drones” advanced radios and receivers are becoming more widely available and dropping in price all the time.

Many receivers today come with failsafe options which set each channel to a user-determined position in the event of radio signal loss. This makes a lot of sense if you are flying a “dumb” model airplane. The word “dumb” means there is no onboard smart computer. Our model tanks however do have an onboard computer, the TCB. It is much better to let the TCB decide what to do in the event of a radio signal loss, and ironically, receiver failsafes can interfere with that. If the receiver continues to send valid channel data even when the signal is lost, the TCB will never know the signal was lost, and will assume all is well. This could cause the tank to keep rolling along after you've lost control and hit some obstacle. This isn't as bad as an airplane falling out of the sky, but our tank models are often quite heavy and yet also have fragile and expensive components on them, so we don't want them running into walls if we can help it.

If your receiver has the option to disable failsafe channel values, and instead simply stop all channel data when the signal is lost, that is ideal. The TCB will detect the interruption and stop all tank movement immediately.

If there is no option to disable failsafe, set the receiver to return all channels to center values when the signal is lost. This will also cause the tank to come to a stop, but depending on the deceleration constraints you have set, the tank may take some time to coast to a stop.

Note: The SBus serial protocol actually sends more information than just the 16 channel values, it also sends information about the receiver's signal status, which the TCB monitors. If that information indicates the signal has been lost, the TCB will ignore any other failsafe channel values the SBus data stream may provide and instantly stop the tank.

Note: When the TCB detects signal loss it will blink the onboard red and green LEDs quickly. You can also choose to have the TCB blink every other light attached to the board (L1, L2, Brake, MG, and the IR apple LEDs) - see the Lights & IO tab in OP Config for this setting.