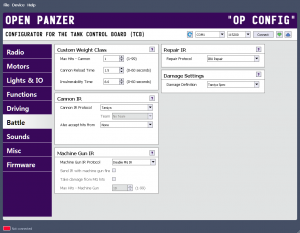 With the addition of an IR transmitter and a compatible IR receiver (often called an “apple”), the TCB can engage in IR battle with other tanks.

For details on the hardware requirements see the Infra-Red page.

IR battle was originally popularized by Tamiya and their concept of weight classes has become a standard in the industry. Tamiya defines three tank weight classes: Light, Medium and Heavy. Each class specifies the amount of time it takes for the tank to reload (firing rate), the number of hits a tank can receive before being destroyed, and how long of an invulnerability time the tank is given after being destroyed. The TCB implements these three weight classes precisely as defined by Tamiya, but also allows the user to specify a Custom weight class with their own settings. 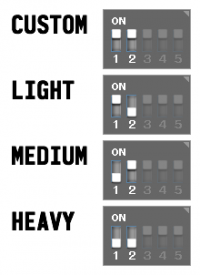 For reference, the Tamiya weight class settings are listed here:

This setting defines how many cannon hits the vehicle can take before being destroyed. This is the primary setting that determines how “light” or “heavy” a vehicle is.

How much time must expire after firing the cannon before the cannon can be fired again. As a rule, lighter vehicles can reload faster than heavier ones.

As per the Tamiya spec, a destroyed vehicle is rendered inoperative for 15 seconds. After that the vehicle automatically comes back to life, or “re-spawns” to use a computer gaming term. Tamiya calls this “recovery mode.” During recovery mode the tank is invulnerable to enemy fire, but is allowed to fire its own cannon. Invulnerability time is intended to give the newly recovered vehicle an opportunity to move to a defensive position. Light vehicles typically have longer invulnerability times, and heavy vehicles shorter times.

Some protocols implement a team setting that can be used to ignore hits from other members of the same team.

If desired, select a machine gun IR protocol you would like to transmit or take damage from.

If you have enabled the option to Take Damage from MG Hits, set how many hits it will take to destroy your vehicle. Unlike the number of cannon hits this setting does not vary by weight class - if enabled, it applies to all weight classes the same (including the Custom weight class).

Assuming your vehicle has already taken some damage, if it is then “hit” with a repair IR code it will be repaired by the amount of one cannon hit (or the equivalent number of machine gun hits). This feature is always active, all you need to do is select which repair protocol you want to accept hits from. A repair operation takes 15 seconds and during that time your vehicle's transmission will be disengaged and your cannon disabled. In other words, your vehicle is especially vulnerable to enemy fire while being repaired.

You can choose whether to fire the Cannon IR code or the Repair IR code depending on the position of the fight/repair switch on the TCB:

Select the repair protocol you want to use - both in being repaired, and to repair others if your tank is set to Repair mode.

A Damage Definition is a collection of rules that describe what happens to a vehicle as it receives hits from IR-enabled enemies. The Tamiya specification is the most well known. The TCB has capabilities that would make more creative and interesting Damage Definitions possible, but they are still under development.