Many mid-level and higher radios come with removable modules on the back of the transmitter case. Inside these modules is the actual RF (radio frequency) circuit, and by changing the module you can change your radio to an entirely different protocol. There are two basic types of modules called JR form-factor and Futaba form-factor. A JR form-factor module doesn't necessarily mean it is made by JR or runs a JR frequency - it just means the shape of the physical module will plug into any transmitter that has a JR form-factor module bay.

Today there are many aftermarket modules available for nearly every protocol under the sun. If you have a module radio but wish you could use a different manufacturer's receiver, you may be able to just by changing the module. This is also a great way to update some of the older but still perfectly functional FM radios.

If you have read this far you know we are somewhat partial to FrSky radio gear. We don't work for FrSky or have any affiliation with them, but they know what modelers want and seem willing to give it to them at a decent price and with high quality. FrSky sells both JR and Futaba form-factor modules that we highly recommend for anyone with a module radio looking to upgrade (as we already mentioned at the top under the 9X section). 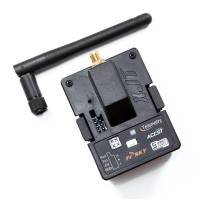 The FrSky XJT module can transmit 16 channels and includes telemetry capability. Pair this with any FrSky X-series SBus receiver and you have a great combination (we particularly like the X4R-SB receiver). This module is the same one already installed internally in the Taranis radio.

Unfortunately FrSky has not yet released an X-series module in Futaba form factor, or that would be our recommendation. They claim they will someday, but in the meantime, you can still get the FrSky DFT D-series module. This module can transmit up to 8 channels and FrSky has several PPM receivers for it - we especially like the FrSky D4R-II receiver.